The New Turkey Guide is available Find information on the Spring and Fall seasons as well as permit pricing and youth hunting information.  Download your copy today

Posted on September 16, 2014 by huntinginnebraska

Posted on October 8, 2013 by huntinginnebraska

I would like to thank the Nebraska Hunting Company for his help in getting me a Merriam’s turkey.  Scott is totally committed to getting you a turkey.  He is focused on hunting and will put you on birds.  For me this is the third leg of a Grand slam, now only needing the Osceola.  Another group hunting while I was in Nebraska completed 3 grand slams!  One needed a Merriam’s, the other two needed a Merriam’s and a Rio!

Thanks to Nebraska Hunting Company for my Merriam’s and awesome hunting memories.  Thanks to Marilyn and Walt for the hospitality and wonderful accommodations at Uncle Buck’s Lodge.

Posted on October 6, 2013 by huntinginnebraska

Merriam’s Turkey Hunting Is For Everyone

Posted on April 9, 2013 by huntinginnebraska 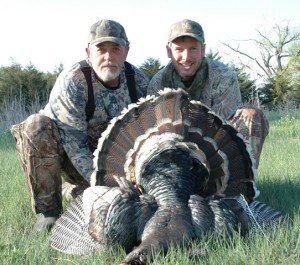 My trip to Nebraska to hunt turkeys with Scott Croner in May 2010 turned out to be one of the greatest hunting trips I have taken. The accommodations where excellent and Scott’s knowledge and abilities made this trip memorable. Scott is the hardest working guide I have ever encountered, and his drive to provide a successful and enjoyable hunt is second to none. Scott thanks again for the great hunt and look forward to hunting with you again.”
Ron Bieterman

Posted on April 4, 2013 by huntinginnebraska

The rumors tucked away in the Sand Hills of central Nebraska hold more truth than told. Deep in this picturesque valley of cedars, sand and lofty hills, is a sought after secret of the mystical Merriam’s turkey.

Plenty of the country hunted wasopen, but the birds have a propensity to find and use available cover to their advantage.The time-crazy world hasn’t changed the background of the old ranch town I stayed at. As I passed through the hundred yard main street strip of not-a-whole-lot, I soon became familiarized of what the little town was known for from the camouflage jackets and cowboy hats worn by the locals. I marveled at cattle ranchers stringing barbed-wire fence by hand for miles, while others admired their massive prairie burns. I felt as if I were taken back to the cowboy days and imagined the covered wagons trekking across the desolate land. Sod houses from the 1800’s still stood amongst the canyons and withheld their enduring beauty throughout years of erosion.

Although, the scenery and generalization of the Sand Hills inspired my historic inner-feelings, I was there to conquer the last species of turkey for my Grand Slam quest and face the secrets head-to-head with Nebraska Hunting Company, a nationally acclaimed outfitter from the heart of Nebraska.

The owner and guide of Nebraska Hunting Company, Scott Croner, escorted me to one of his many morning setups. We fast-footed down a steep gully and them back up the other side to reach the peak of one of the thousand rolling hills. As I sat next to a cedar shrub anticipating the morning sunrise, the Merriam gobbler’s ignited the hills. The feud for dominance prolonged throughout the entire morning. Capturing each moment as it passed was nearly impossible. The crimson radiance of sun bloomed among the landscape, while turkeys began darkening the field to bask in the fresh heat. Hunter’s of all kinds couldn’t imagine the feelings I relished in as the sun accented miles upon miles of terrain with blushes of deep color.

The Merriam’s wild turkey has been successfully stocked beyond its suspected natural range in the Rocky Mountains and outside of the mountains into Nebraska, Washington, California Oregon and other areas.I soon broke a light yelp rasp into the stiff Husker air. It boomed over the cast of fields with an echo of intensity. A parade of males answered with desperation. I yelped once more to seduce my lonely companions. They began gobbling to entice my will to come over, yet I played hard-to-get. The males nearly lost all sense of patience after five minutes of lockjaw from me. One-bye-one they began their voyage en route to the single yelp from my turkey call.

As the gobbling maniacs shuffled their tubby bodies across the open terrain, Scott, my cameraman and I adjusted our positions to premeditate where the birds may come and visualize how perfect this may work. Unlike feeling engulfed by the timber of the Midwest while hunting, I felt nearly naked with only a small bush to conceal my Realtree HD camouflage. Being very still, I began calling once more to arouse my quarry with another gobble. Not only did they wail another electrifying gobble toward us, but they were nearly within BB range. Invariably, a surge of animosity enlivened my nerves and my body began to convulse in thrill. The gawky looking heads bobbed as they each looked at each other wondering if they’d made a wrong turn somewhere along the way.

At 40 yards, the three pompous birds blossomed into a clutter of feathers. The strutters marched closer as the sandy dust blew behind each ones step. My cameraman urged me to shoot whenever I was ready. I acknowledged his command, but couldn’t help imagining if they’d get any closer; they did.

“Nebraska turkey hunting has enriched my soul with a different style and technique of hunting.” — Brandon WikmanI milked the hunt out until the birds were at a whispering distance of 10 yards. As long as I was still, I knew my camo would hold its own. My index finger snapped the safety, which the birds heard. Each head was elongated, like a periscope. I could have sworn that dinosaurs were still living from the scaly rough legs and paint-ball splattered head of blues, whites and reds. The common alarm putts were sounded before my wad of ammo clobbered the bird I shot at.

Looking into the camera like a fool, my words wouldn’t come out. I was literally speechless. My first Merriam’s gobbler sprawled a few steps away and a long awaited Grand Slam of the four different species of wild turkey turned me into a dumbfounded mute.

Nebraska turkey hunting has enriched my soul with a different style and technique of hunting. The wondrous Sand Hills have allured my temptations to venture back to Nebraska and relive the secrets that were witnessed.

The Sand Hills are as dry as your mouth feels after wadding seven saltines down your throat. The color green isn’t a common color at the beach, likewise the hills either. Therefore, wear camouflage that has been through the laundry a few dozen times to blend in with the lighter brows, dulls greens, and crisp yellows or simply wear Realtree’s Advantage Max-1 HD Open Terrain to stay concealed.

Most of Nebraska’s turkey hunting takes place on private land. Preseason scouting will help establish and renew landowner contacts — the first steps to a successful hunt.>>>Before slobbering on your mouth call to find a gobbler, locate a place you can sit down immediately. Small cedar tree’s dominate the landscape, which makes you vulnerable to the eyes of turkey’s for hundreds of yards and the last thing you’d want to happen is for a gobbler to crank up and start bolting towards you as your standing there finishing your series of yelps.

>>>Never bypass a small woodlot, because looks can be very deceiving. The land is open and vast, and by noontime birds are looking for shaded places—canyons, windbreaks or any spot low and out of the sun.

Forecast: Severe heat and drought has plagued much of the Nebraska this summer, which might have impacted pheasant production. The state’s July Rural Mail Carrier Survey indicated statewide decrease of 15 percent compared to 2011, Jeff Lusk, Upland Game Program Manager with the Nebraska Game and Parks Commissions, says survey conditions weren’t conducive to observing wildlife, so the decrease may not be as steep as the numbers would indicate.

Despite a slight drop, Nebraska continues to be among the top states in the Midwest for pheasant hunting. Based on the summer survey, the southwest region will once again offer the best hunting opportunities, particularly Red Willow, Hitchcock and Hayes Counties. Additionally, the eastern portion of the Panhandle region (where the survey indicated a 19 percent increase) and the Central region, namely Dawson, Sherman and Greeley Counties, should provide good pheasant hunting opportunities. Lusk points out that continued habitat loss in eastern Nebraska to irrigated corn agriculture has impacted all upland species in this region.

Nebraska has a reputation over the years as a great destination for pheasant hunting.  All across the state you will find a diverse range of habitat favorable to large populations of wild pheasants and other upland game birds. 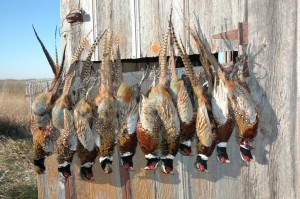 The New Turkey Guide is available
Find information on the Spring and Fall seasons as well as permit pricing and youth hunting information. Download your copy today

The return of the wild turkey to Nebraska, other states that historically had turkey populations and to states outside the turkey’s historic range is one of the great success stories of wildlife management.

The wild turkey was extirpated from Nebraska by about 1915. The modern history of wild turkeys in Nebraska began with releases in 1959. The population prospered, especially in the Merriams subspecies and hybrid birds, and the turkey’s range now includes most major river drainages and the pine ridge. Small, isolated populations are found in appropriate habitat outside the primary

Most of Nebraska’s turkey hunting takes place on private land, and preseason scouting to establish and renew landowner contacts and locate flocks are the first steps to a successful hunt. 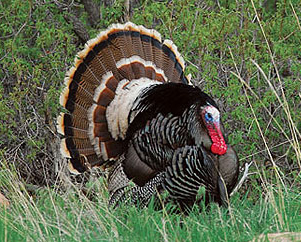